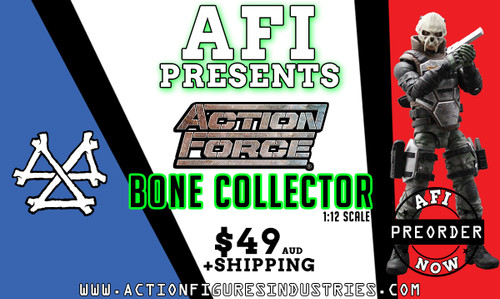 Nobody seems to know the full history of the man known as THE BONE COLLECTOR. It’s established that he hails from Tucson, Arizona where he had honed his survivalist training and built a tremendously impressive self-sufficient failsafe shelter. Some believe he was disappointed that the fracturing of the United States didn’t lead to actual nuclear war. In the new republics, THE BONE COLLECTOR leads a squad of elite operators known as THE BROTHERS OF BONES. They report directly to THE BONE COLLECTOR, and are routinely requested by THE GARRISON when the mission is of critical importance. He is meticulous and exacting, although capable of spectacular violence while simultaneously delivering orders in a calm, collected voice. Any new recruits to THE BROTHERS OF BONES, must be able to deliver the same level of violence as THE BONE COLLECTOR in addition to elite military skills.

Observation: “The mission was to retrieve a hijacked shipment of Casteladium, and when we finished the Commander instructed us to pile the bodies of the fallen in stacks of five – targets on the left, Brothers of Bones on the right. He eyeballed the mathematic carnage in front of him, taking note of the kill percentage weighted against the loss of his squad. He does this EVERY MISSION, so we started calling him THE BONE COLLECTOR.

These items are In Hand